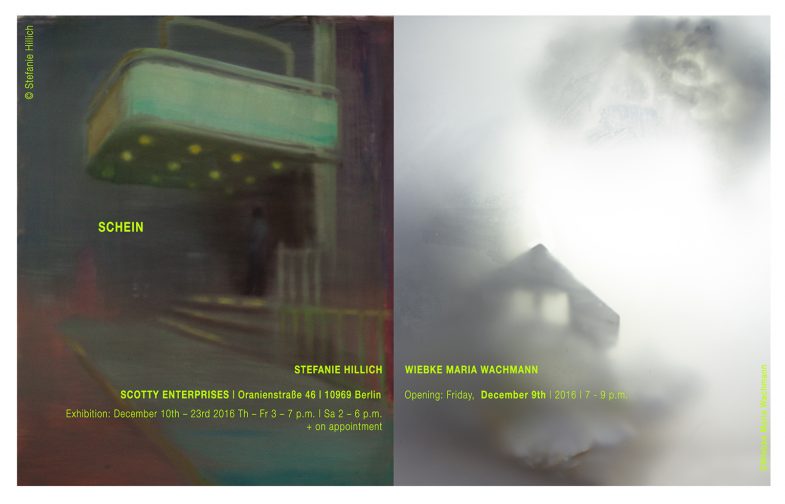 Light plays an important role in Stefanie Hillich’s scenes.
The subjects of her pictures are substantial, presenting what seems to be everyday-situations. She generates a mood, a feeling that one cannot escape from, while playing with the subconscious. Sometimes melancholy, surreal, usually peculiar, with a subtle shift towards the grotesque, her images are characterised by refracted colours. Her view of what she shows us is characterised by a fine sense of humour. The subjects, some of which are reminiscent of theatre stages, are presented with a variety of painting methods.

Wiebke Maria Wachmann presents auratic-appearing light boxes in which a house on a hill, seeming like a figment of imagination, a fairy-tale landscape is shrouded in mist, a view from a window breaks up the nothingness behind it with shutters folding like wings. Light – from weakly shimmering to glaring. The well-known motives, the house, the hill, the landscape, the window – with their familiarity subtly withdrawn from them.
Michaela Nolte: […] „Wiebke Maria Wachmann’s rooms seem filled with latent images that call up vague visualisations, conditions of memory. Marcel Proust equates the appearance of a memory in the mind with the development of a photographic plate that has long been exposed but only contains a latent image until the moment of development. – Doubt, surrounding Wachmann`s work like a fragile sheet of ice, becomes a single certainty. […].“

The exhibition „SCHEIN“ thus uses images of a suggestive presence to dazzle, believe, and doubt.